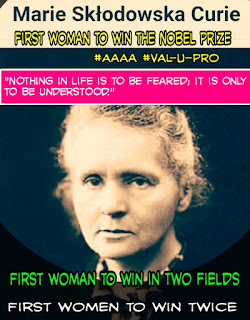 VAL-U-PRO CONSULTING GROUP, LLC - SRIKANTH KIDAMBI
ComeMummy/ ComeDaddy/ ComeDaddyMummy/ ComeParents
Oct 13, 2017
#FridayWisdom #Wisdom #FridayThoughts #VAL-U-PRO #ComeMummy#Come #Mummy #AAAA #AAAAMegaEcosystem #Amma #AmmaEcosystem
Originally shared by VAL-U-PRO CONSULTING GROUP, LLC - SRIKANTH KIDAMBI
#MarieCurie #NobelPrize #Marie #Curie #Nobel #Prize #Physics #Chemistry #Radioactivity #Bacquerel #Pierre #Joliot #Irene #Paris #Val-U-Pro #Amma #AAAA #Radio #SSK #SrikanthSrinivasanKidambi #SrikanthSKidambi #KSSrikanth #FridayWisdom #FridayThought"Nothing in life is to be feared; it is only to be understood" - Marie CurieThere is an interesting story about selective amnesia - This story is about how Marie Curie was snubbed for being an immigrant from Poland by media, and those with power in France, while the same people never lost an opportunity to take credit for her being a French woman after Marie Curie became the first woman to win two Nobel Prizes in two different fields.It is one more example that shows the importance of looking at the quality of work, and the contribution of an individual/team rather than where they are from.This story is not confined to France. Srinivasan Ramanujan had to go through a somewhat similar experience. When people have not much understanding of the value of those contributions, they would never get to appreciate those contributions, and that person as well. In Ramanujan's case, Mathematicians in England knew Ramanujan's extraordinary ability, but he never got that reception in India. We will see these stories later - Not only these two but many others from around the world.

VAL-U-PRO CONSULTING GROUP, LLC - SRIKANTH KIDAMBI Public   1d Muybridge horse galloping animation created in house from static Muybridge images. Muybridge was the pioneer in this area of animation-making and his work formed the basis for many other next-gen creations including Disney animated series. Please click the following link for those animations. https://plus.google.com/111375717217714398633/posts/2WyJ5bdj67D ‹ › 3/19/19 4 Photos - View album Shared publicly Add a comment... no plus ones 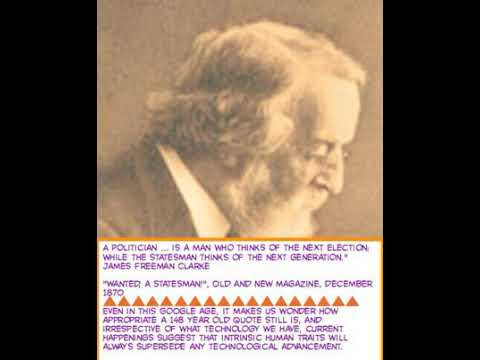 A politician … is a man who thinks of the next election; while the statesman thinks of the next generation." James Freeman Clarke "Wanted, a Statesman!", Old and New magazine, December 1870 🔺🔺🔺🔺🔺🔺🔺🔺🔺🔺🔺🔺🔺🔺🔺🔺🔺🔺 Even in this Google age, it makes us wonder how appropriate a 148-year-old quote still is, and irrespective of what technology we have, current happenings suggest that intrinsic human traits will always supersede any technological advancement. https://youtu.be/S65d7krynVA

VAL-U-PRO CONSULTING GROUP, LLC - SRIKANTH KIDAMBI Owner Global Economic Medium (GEM) Jun 16, 2018  We are in a distinctly different world compared to what Mr. Adam Smith perceived as capitalism. When Adam Smith wrote his Wealth of Nations, the world population was not even 1 billion, and now the world population is close to 8 billion. Secondly, as with Newtonian and Einsteinian thinking, economic theories have also gone through various levels of refinement and changes. What we perceive is capitalism is no way a complete representation of what we have right now. In terms of details of history, that is a discussion for another time. Coming to the discussion on Economic theories, and to give a brief insight on how it has evolved, even after Adam Smith passing off the mantle to his followers, Malthus and Ricardo, there was a difference in opinion between those two on the economic theories promoted by Adam Smith. One of the aspects of Malthusian the